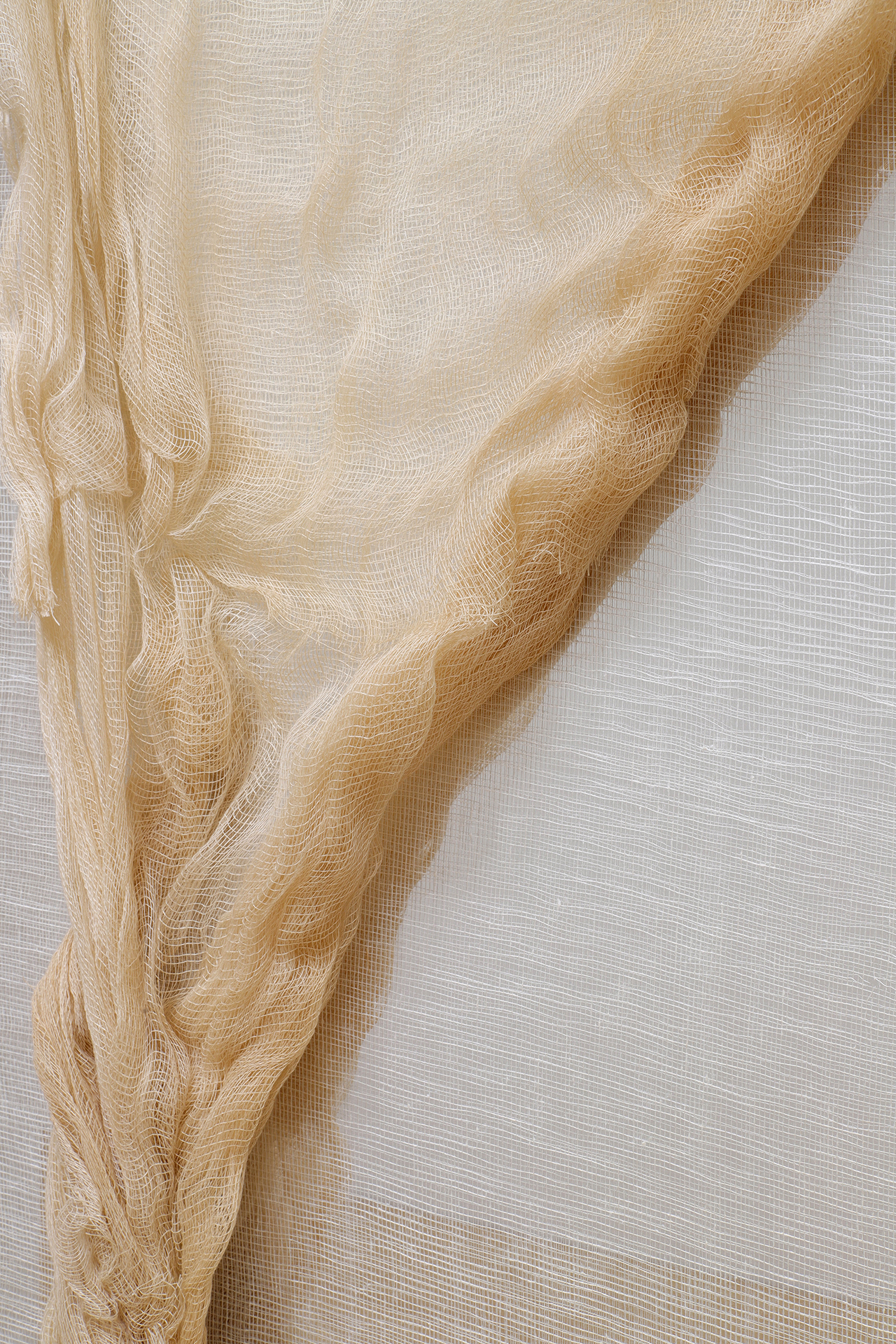 Helène Aylon
Mirror Covering, 1987
Wood, paint, mirrored Plexiglas, gauze
76 ½ x 255 ¾ inches
(detail)
Kerry Schuss and Leslie Tonkonow are pleased to announce an exhibition of works by Helène Aylon that display the presence of reflective surfaces in works from the 1970s to the present and their spiritual, poetic, and political associations. The central focus of the exhibition is a monumental multi-part piece entitled Mirror Covering (1987) that recalls the formal concerns of Minimalist sculpture while evoking the deeply held philosophical beliefs that underlie the diverse body of work produced throughout Aylon’s career. Mirror Covering, measuring six and one half feet high by more than twenty-one feet long, is composed of eleven painted wooden structures, each one encasing a mirror that has been casually draped in layers of gauze. Engendered by the Jewish tradition in which mirrors are covered to suppress the ego during the initial mourning period, it commemorates the eleven million people lost in the Holocaust—not only the Jews, but also the Romani, Catholics, Gays, political dissidents, and others. In describing the work herself, Aylon noted the “human scale” of the box-like elements, suggesting that they allude to windows or doorways into another realm. She chose to use gauze for both symbolic and aesthetic purposes; the bandage-like material referring to healing, and the loose structure of the material recalling drawing:

I chose gauze because it has this crosshatched thread that looks like a line drawing. You know—it’s just horizontal and vertical… And so it makes a drawing … and I do think that this is going to unravel in time and that’s fine … I just see this kind of thread-like covering as something that could move with the wind, something that could be in the air and somehow breathe. So it’s almost like opening up a window and letting the air come in.

Also on view are selected paintings from Elusive Silver (196–73), Aylon’s first distinct series of process-driven artworks in which she introduced an evolving feminist consciousness to a medium that had been firmly dominated by the notion of a heroic, and almost exclusively American male idiom. Refraining from “mark making” (“I didn’t want to be hammered in by exactitudes”) she allowed the works themselves to inform the evolution of her ideas. The paintings, made using industrial materials such as aluminum, Plexiglas and spray paint, strongly reflect and refract an inner glow that changes visually with the viewer’s stance and the light conditions. The perceptual changes inherent in these works anticipate her later series of the nineteen-seventies (Paintings That Change in Time and Pouring Formations) in which Aylon radically challenged established norms by creating works that were intended to physically change with the passage of time. The exhibition also includes one of the artist’s more recent works, Tears for the Children (2016). Consisting of eight framed 12 x 12 inch mirrored squares onto which she applied clear acrylic droplets, the piece was originally featured in the multi-part, mixed media installation, Afterword: for the Children, an addendum and conclusion to The G-d Project: Nine Houses without Women (1990–2016), her more than twenty-year feminist deconstruction of Judaic texts. Helène Aylon was born in 1931 in Brooklyn, New York, and died in 2020 in New York City. Raised within a modern Orthodox Jewish community in Boro Park, Brooklyn, she was married to a rabbi at the age of eighteen and became widowed, with two young children, at the age of thirty. While in her mid-twenties, she enrolled at Brooklyn College, taking classes with Ad Reinhardt who became her friend and mentor. Reinhardt arranged for a studio visit with Mark Rothko, a transformative event for the young artist who, having entered the secular art world, felt free to share with Rothko the spiritual foundations of their common cultural backgrounds. Her first solo exhibition took place in 1970 at the Max Hutchinson Gallery in Soho. Following a second solo show there in 1972, she was represented by the legendary art dealer Betty Parsons. Since then, Helène Aylon has participated in one-person and group shows in museums and galleries throughout the United States, Europe, and Israel. She has been the recipient of numerous honors and awards including, among many others, three awards from the Pollock Krasner Foundation, two fellowships from the National Endowment for the Arts, two fellowships from the New York Foundation for the Arts, and a Lifetime Achievement Award from the Women’s Caucus for Art. In 2018, Aylon joined Leslie Tonkonow Artworks + Projects where a solo exhibition of works from the Elusive Silver series took place in 2019. Her most recent one-person show was presented by Marc Selwyn Fine Art in Los Angeles in the winter of 2020, only months before Aylon died of Covid-19. Works by the artist are in the collections of the Whitney Museum of American Art, New York; the San Francisco Museum of Modern Art; the Hammer Museum, Los Angeles; the Rachofsky Collection, Dallas; the Virginia Museum of Fine Arts; the Jewish Museum, New York; the Weatherspoon Art Museum Greensboro, North Carolina; the American University Museum, Washington, D.C.; the Morgan Library and Museum, New York; and those of many other distinguished institutions and private collectors. Kerry Schuss Gallery is located at 73 Leonard Street between Church Street and Broadway in Tribeca. Gallery hours are Tuesday through Saturday, 12 to 6 pm and by appointment. Selected works by the artist can be seen simultaneously, by appointment, at Leslie Tonkonow Artworks + Projects, 401 Broadway, Suite 411, at the corner of Walker Street and Broadway in Tribeca.