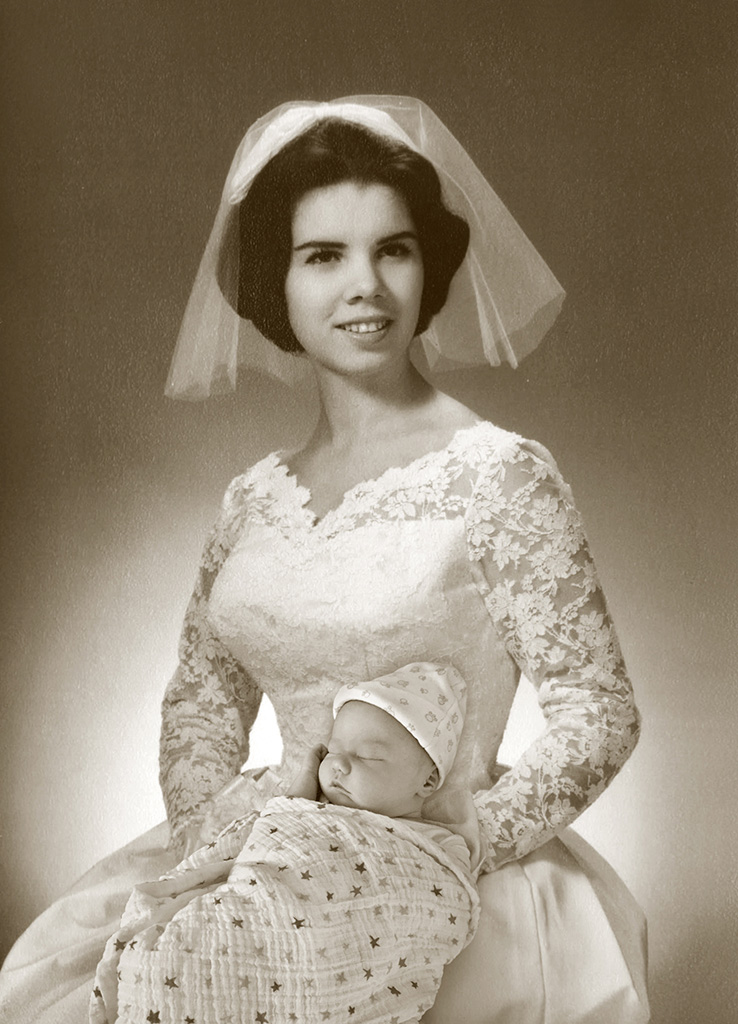 LAUREL NAKADATE
The Kingdom #2 (2018)
We are pleased to announce our fourth one-person exhibition of new works by Laurel Nakadate including photographs, videos, and a sound installation.

For almost twenty years, Laurel Nakadate has created performative videos, films, and photographs that explore chance meetings and first encounters with strangers. In The Kingdom, she focuses inward, on the depiction of intimate bonds and the creation of familial histories—both real and imagined.

Taking its title from the last words spoken to the artist by her mother, who died shortly after the birth of Nakadate’s son in the summer of 2016, the exhibition centers on a series of thirty-four snapshot-size photographs (also titled The Kingdom) in which Nakadate envisions a physical connection between her son and his grandmother who never had the opportunity to hold him. Strangers once again figure into the creation of her work as Nakadate hired anonymous technicians on the Internet to merge photographs of her mother, spanning the course of her life, with images of her infant son. Her only direction to these technicians was to place the baby in the woman’s arms. These altered photographs imagine a history and a future that cannot exist, and merge this reimagining with longing.

Other highlights of the exhibition include a durational piece that connects the life of Nakadate’s child to that of her father who, from 1944–1945 at the age of one, lived with his family in the Minidoka War Relocation Camp in Hunt, Idaho. Entitled Executive Order 9066—after the presidential decree that forced the incarceration of Japanese American citizens in prison camps following the bombing of Pearl Harbor—the work consists of 180 daily snapshots of her son. Beginning at the age of one year and continuing through eighteen months, they correspond to each day of her father’s internment.

Among the additional works on view are The Last Polaroids, Nakadate’s photographs of her ailing mother shot in 2015 using visibly degraded instant film, resulting in images that are both elegiac and abstract; City of Stars, an audio landscape created from the artist’s mother’s voicemail messages recorded during the last five years of her life, heard through a disused payphone; photographs made during pregnancy and after the birth of her son; and a recording of the light from her newborn son’s body shot on thermal video.

In 2001, after completing her MFA at Yale University, Laurel Nakadate received both notoriety and widespread admiration for provocative, complex, and often unsettling works that challenge conventional perceptions of power, seduction, tenderness, and trust. From her earliest video pieces in which she recorded herself interacting with men met through chance encounters, to more recent works in which she arranged to photograph strangers, met through DNA testing, at night in remote locations, Nakadate has exhibited an enormous willingness to take risks in achieving her artistic goals.

Laurel Nakadate has participated in solo and group exhibitions at museums and galleries worldwide including a critically acclaimed ten-year survey Laurel Nakadate: Only the Lonely at MoMA PS 1 in 2011. Her works are in the collections of The Museum of Modern Art; the Whitney Museum of American Art; the Cincinnati Art Museum; the Yale University Art Gallery; the Princeton University Art Museum; the Hessel Museum of Art at Bard College; the Museum of Modern Art, Warsaw; the Hirshhorn Museum and Sculpture Garden; and other distinguished institutions. The artist has also received widespread acclaim for two feature-length films, Stay the Same Never Change, which premiered at the 2009 Sundance Film Festival, and The Wolf Knife, which was nominated for Gotham and Independent Spirit Awards.